David and Christine Bergmann started Laketown Electric Corporation in 1975 and is celebrating its 47th year in business. When LEC started, David performed the electrical work in the field. During that time, most of his work was conversion of apartments to condominiums in downtown Minneapolis. That work dried up in the early 1980s and Bergmann concentrated his business on commercial and industrial work. LEC was originally a union contractor. The union rejected Bergmann’s brother in 1981, so Bergmann left the union and became a merit-shop contractor. 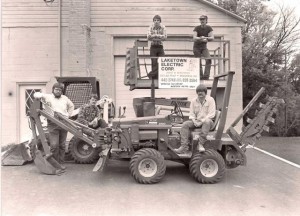 The original “shop” back in the early 1980s in downtown Waconia.

LEC is known as a contractor that takes on tough projects and completes them on time and on budget. The company specializes in the construction and maintenance of healthcare facilities, commercial buildings, food processing, automation, manufacturing, education, underground projects, generators and much more. Approximately 75% of LEC’s projects are design-build.

LEC is a second generation family run business, with owner Matt Bergmann alongside longtime leader Andy Kerber guiding the business over the last 11 years. During this period, LEC acquired a business in Southern MN, Javens Electric, opened an office in Rochester, MN and grew its workforce from 12 to over 135 employees. As a result, LEC has been named a Minneapolis and St. Paul Business Journal Fast 50 company the last six years, and to the Inc Magazine 5000 list the last six years.

LEC’s growth is aggressive with plans to expand territory and look into additional acquisitions.

We look forward to helping our clients achieve their goals and grow, while we aim for the same end result.